Koa Wood in jewelry making is a common modern practice. Hula dancers often wear Koa bracelets and other jewelry. We've taken it a step further by pairing the beautiful wood with hypo-allergenic metals for a more versatile look as well as add to our pieces. While koa jewelry is fairly modern the use of Hawaiian Koa wood dates back centuries.

The Koa wood, also known as the Hawaiian mahogany, has always been treasured for its fine texture. The tree, native to Hawaii, thrives on volcanic soil, particularly on the Big Island where it can grow upwards of 100 feet tall. The stunning color of the wood varies between a lighter or orange brown to a deep red based on the area it grows in.

The Polynesians have long treasured the Koa wood tree for its strength, durability and resilience. The term "Koa" translates to bold, warrior-like, brave, and fearless. It was used to make everything from weaponry and tools like spears and paddles to musical instruments like the ukulele. The prized Hawaiiam Koa wood was even reserved for people of royalty status (Aliʻi) and the Hawaiian Monarch where it was sculpted into images of gods and made into furniture among other uses. Whole Koa logs, up to 60 feet long, were used to make voyager canoes called Te Puke. Watch this short video from the History Channel showcasing how historians believed the Polynesians may have used these and their navigational skills to discover the Americas before Columbus.

By the turn of the century the prized koa wood was still primarily used for those of higher status and in government architecture to make furniture, staircases, statues, and other woodworks. Iolani Palace on Oahu, the official residence of Hawaii’s monarchy, is a beautiful place to view such use. The demand for Hawaiian Koa wood is still high for making quality furniture and other upscale projects.

The State of Hawaii is working on preserving this rare but desirable wood by implementing harvest restrictions and adding reforestation projects. We at Koa Wood Rings only use wood that's been sustainably sourced, most often reclaimed pieces from woodworking projects. We also commit to helping the reforestation projects by donating a portion of our proceeds to foundations that work to educate and preserve Hawaii's natural forests such as The Hawaii Forest Institute and Hawaii Forest Industry Association. Our beautiful jewelry is purchased everyday as gifts, to celebrate anniversaries, and our rings are often the symbol of love as wedding bands. We're honored to be a part of people's love stories, memories, and aloha.

Use left/right arrows to navigate the slideshow or swipe left/right if using a mobile device
★ Judge.me Reviews

Let customers speak for us

Very unique item. My wife loved this birthday gift. I will likely purchase another item from Woodsman Jewelry!

Very nicely handcrafted bead - great hole size for accommodating different necklaces. Looks terrific on gold or bronze colored chains. Has been added with my other beads on necklaces!

Beautiful and well made. I love it and get many compliments.

Woodsman Jewelry worked with me and my fiance. They were so helpful! The ring came out beautifully engraved with our wedding date and complimentary engraved with the hawaiian islands. This company is amazing! 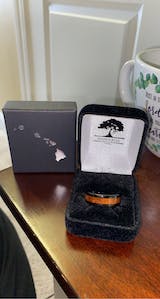 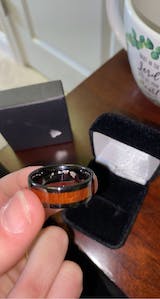 I bought this ring for my husband and he loves it. Beautiful and comfortable.